He didn’t really believe in the Alliance of Civilizations:

A 26-year-old German-Turkish citizen charged with plotting an attack with explosives on U.S. installations in Germany and attempting to recruit al-Qaida supporters over the Internet is standing trial in Frankfurt.

Prosecutor Michael Bruns told a court Friday at the opening of the trial that the man, identified only as Adnan V. had planned a “seriously threatening violent attack.”

Bruns says the suspect had collected small amounts of explosives and instructions for making a bomb at his home in nearby Offenbach, where he was arrested in October 2009.

Bruns says the suspect was planning to “kill innocent people that he viewed as ‘unbelievers.'”

The suspect made no statement to the court. His trial continues Aug. 19.

Germany‘s Central Council of Muslims said it was advising Islamic professional football players that they need not fast during Ramadan, ahead of the regular season resuming Friday.

“The professional player can make up the fasting days during periods when there is no match and in that way show his respect for God and the holy month of Ramadan,” council president Aiman Mazyek said in a statement.

A dispute over the issue in Germany began when the second-division team FSV Frankfurt gave three Muslim players an official warning in October 2009 for fasting during Ramadan and failing to inform their managers.

The German Football Federation (DFB) reached an agreement with Muslim leaders on fasting in 2010 allowing players to respect one of the five pillars of Islam while fulfilling their professional obligations.

Two of the main umbrella groups representing Germany’s estimated 4.3 million Muslims said in remarks published Wednesday that such a move would be a good step forward for integration.

“That would have a great significance for integration,” the chairman of the Central Council of Muslims in Germany, Aiman Mazyek, told the online news portal, News.de.

While Protestants and Catholics have about 90 priests each providing spiritual support to soldiers, there is no Muslim imam or counsellor, even though there are about 1,200 Muslims serving in the Bundeswehr, according to website.

via Muslims call for imams in the German military – The Local.

END_OF_DOCUMENT_TOKEN_TO_BE_REPLACED 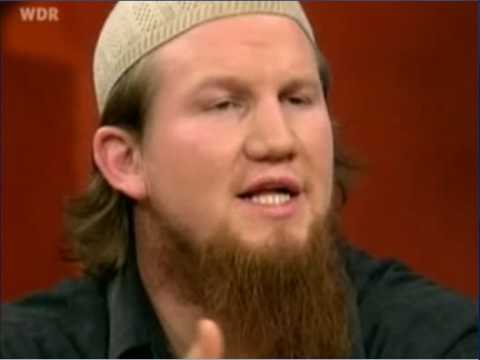 This is an important proof of two things: firstly, of the real danger we face, that is mainly an ideological one and, secondly, of the race playing no important role in this. If you support Wahabbism/Salafism, it doesn’t matter your origins. What matters is that support.

We can add that converts are specially dangreous because they have to proof that they are as harder as the hardest of their teachers, this guy being “educated” in Saudi Arabia:

Abu Hamza, born a German named Pierre Vogel in 1978, is a very popular Islamist preacher in Germany. The former professional boxer became Muslim in 2001 and is now among the most influential German representatives of Saudi-originated Wahhabi fundamentalism, which masquerades as “Salafism.”

His “kunya” or “Islamic nickname,” Abu Hamza, means “father of the strong.” He should not be confused with the notorious radical Muslim agitator currently locked up in Britain, Abu Hamza al-Masri, known for his missing eye and a prosthetic hook that substitutes for his right hand, or for the two late al-Qaida terrorists active in Pakistan and Iraq, who also used the same name. Vogel’s impact among German Muslims is no less ominous, however, even if his extremism appears more restrained.

Adherents of Wahhabism like Pierre Vogel, alias Abu Hamza, call themselves “Salafi” in claiming they emulate the prominent adherents of early Islam. “Salaf” is an Arabic noun meaning “predecessor” or “forefather,” and the first three Muslim generations are collectively referred to as “al-Salaf as-Saleh,” or the “Pious Predecessors.”

Vogel received his religious training in an Islamic school in Saudi Arabia. Through nationwide lecture tours and the creation of several websites, he has reached out to very religious young German Muslims, as well as to young non-Muslim Germans with identity problems.

Those who flock to him are impressed by Vogel’s apparent knowledge of Islam and his mastery of Arabic, the language of the Koran. Central to his teaching is the belief that Islam is the only true religion, while all Christians and Jews are “kuffar,” or “unbelievers.” In addition, Vogel sees “da’wa,” or calling others to Islam, as an obligation incumbent on every Muslim. He has fashioned himself as a missionary and argues explicitly that he possesses theological evidence for the superiority of Islam.

…Critics of Vogel describe his method as brainwashing. A young Pakistani studying in Germany comments, “There is currently no alternative for young people who want to learn about moderate Islam in Germany.” The Wahhabi “Salafis” have the best web sites and publish the most translations of Islamic literature. Unfortunately, Muslim university students are typically afraid to say anything about the situation. Whoever speaks against Pierre Vogel will be abused by his supporters, in online chat forums. “The success of this movement makes me very angry, because it has nothing to do with Islam as I understand it,” says the same Pakistani student in Germany. “I do not want to live in a society defined by Pierre Vogel. It would be a nightmare for all people.”

via Christians Under Attack : Radical Islam in Germany: The Convert as Missionary.

His former group was Invitation to Paradise (Einladung zum Paradies), which was investigated by the police and the home of their members raided.

German state interior ministers are warning of a rise in radical Salafist Islam that poses a risk of home-grown terrorism, with one politician calling for changes to residency laws so “hate preachers” can be more easily deported. Hesse Interior Minister Boris Rhein of the conservative Christian Democratic Union told daily Die Welt that Salafism was a “centre and pivot for those who want to participate in so-called holy war.”

“Salafism can in this way lay the path to Islamist terrorism,” he said, adding that the law needed to be changed so that “hate preachers” can be more easily thrown out of the country.

“In future, this should be possible when someone spreads material that goes against the liberal democratic basic order or that fosters radicalisation or, as the case may be, terrorism recruitment.

Anyway, I would like to ask these guys: what about nationals who converted to Islam preaching hate? Those guys can’t be deported…

The German Minister of Education Annette Schavan wants imams teach courses in Islamic religions in schools, in an interview with the weekly Die Zeit to be published Thursday.

…They could be “used in schools” at halftime, as “priests,” said Schavan to Die Zeit. She nevertheless conditioned their hiring that they are trained at university in Germany.