Flag of the OIC. Image via Wikipedia

The real consequences of Breivik’s attack:

In what can rightly be described as a seminal step in relations between the Muslim world and the Western world, the Organization of Islamic Cooperation and the leading nations of the Western world led by the United States and the European Union agreed Saturday to take concrete steps to combat intolerance, negative stereotyping and discrimination, incitement to violence, and violence against persons based on religion or belief.

Ever since he took office, the OIC secretary-general has been working on formulating ways and means to stop acts of religious intolerance. (Really? Because in the Mohammed cartoons, he actually fueled the conflict… and he is one of those who see plots against Islam everywhere and a “pandemic of Islam vilification” than should be fought against with a “blashphemy monitoring mechanism”).

“It was during my address to the 15th session of the Human Rights Council in Geneva that I outlined a new approach toward evolving a consensus against incitement to violence and intolerance on religious grounds that could endanger peaceful coexistence and must be viewed as a direct contrast to the very notion of a globalized world,” said Ihsanoglu. “I am glad that the eight points in the proposed approach found resonance with all the negotiating partners. They formed the basis of the consensus reflected in Human Rights Council Resolution 16/18. The importance of the consensual adoption of this resolution should be duly recognized.”

But there is more:

The U.S. Secretary of State Hillary Clinton had announced the intention of the U.S. State Department to organize a coordination meeting during her participation in the meeting which she co-chaired with the OIC Secretary General, Professor Ekmeleddin Ihsanoglu in Istanbul on 15 July 2011. The meeting issued a joint statement emphasizing the dire need for the implementation of resolution 16/18.

The US is actually supporting the implementation of this resolution that wants to prevent criticism of Islam.

Actually, this is not surprising at all. And so, the last secular Turkish bastion falls and now Erdogan can appoint someone who is more supportive of his view of democracy (1, 2):

Turkey’s top military officer stepped down from his post Friday, a surprise move that exposed growing tensions between the country’s military and Islamic-leaning government.

Gen. Isik Kosaner, Turkey’s chief of the general staff, retired a year ahead of schedule. His decision came as a shock in Turkey and rattled its currency.

Security analysts widely saw the move as a confirmation that Turkey’s military—the second-largest in the North Atlantic Treaty Organization after the U.S.’s, and long seen as the country’s dominant power—has had its wings clipped amid a lengthy power struggle with the ruling Justice and Development Party. END_OF_DOCUMENT_TOKEN_TO_BE_REPLACED

Turkish people. Not a lot of prospects that their descendants will look like them, if we consider the results of this poll, Image via Wikipedia

In the year 2011, 23 percent of Turks think men should be able to marry up to four wives, but not the opposite – against 10 percent in 1996. Interestingly, 60 percent, both male and female, think women should obey men, while 33 percent think women deserve to be beaten by their husbands if they do not obey – compared to 19 percent in 1996. And, naturally, 70 percent think children may be damaged if mothers work. The political findings of the survey are no less interesting. Seventy-five percent of Turks think the West is at fault for poor relations with Muslim nations. And 53 percent blame the U.S. and West for poverty in Muslim countries. Unsurprisingly, 82 percent have a negative opinion of Christians while only 4 percent have a favorable opinion of Jews. Forty-five percent and 41 percent think that the most violent religions are Christianity and Judaism, respectively. And only 9 percent of Turks believe Arab groups carried out the attacks on 9/11.

Anyway, let them enter the European Union… as a “gesture of conciliation with the Islamic world”… 😯

You know, the only problem Spain has nowadays is, of course, that Turkey and Morocco (an autocratic Monarchy in which the King is also the “Commander of the Believers…) aren’t members of the European Union. Absolutely appalling.

That the only casualties of the twin bombings of Norway are European origin and people outside the Islamic religion has not prevented the Spanish Prime Minister Jose Luis Rodriguez Zapatero, calling on EU leaders for Morocco and Turkey to be allowed entry into the European Union as a gesture of reconciliation with the Islamic world.

The Spanish Government’s President spoke about that support in phone calls to both to the Turkish Prime Minister Recep Tayyip Erdogan, and the Alawite ruler of Morocco (what do Erdogan and King Mohammed VI have to do with Norwegian murder? No Muslim was murdered, no Moroccan or Turkish citizen was murdered or hurt…), in which he reiterated his commitment to the alliance of civilizations as the only way possible for a north-south agreement. Zapatero argues that both Turkey and Morocco meet the requirements set by the EU to join their project. END_OF_DOCUMENT_TOKEN_TO_BE_REPLACED 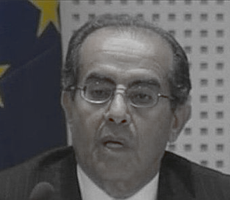 A delegation of Libyan rebels, led by the leader of the National Transitional Council (NTC), has met with NATO and EU officials to discuss the ongoing situation in Libya.

For a long time, European governments treated the NTC with caution, as they did not know what it was or what its members wanted.

However, the NTC has now been recognized by several countries as the only legitimate representative of the Libyan people, and in recognition of this, its leader Mahmoud Jibril was received in Brussels on Wednesday.

Jibril held talks with NATO Secretary-General Anders Fogh Rasmussen at NATO headquarters, and Rasmussen expressed the importantance of the visit.

“They [the NTC] have a great responsibility for the smooth transition to a democratic and inclusive future in Libya,” said Rasmussen.

Well, nothing really new in this:

Hamas would consider a “truce” with Israel, but will never recognise the Jewish state, senior leader Ismail Haniya said on Tuesday as thousands of Gazans celebrated the group’s 23rd anniversary.

Speaking before flag-waving Palestinians from across the Gaza Strip, Haniya said the Islamist group would never recognise its sworn enemy.

“Let it be understood far and near that after the war, the siege, the internal and external plots: we will not recognise Israel,” he told the cheering crowds.

“Our founder Sheikh (Ahmad) Yassin said: Liberate what you can of the West Bank, Gaza Strip and Jerusalem, and where it cannot be liberated, declare a truce,” he said, referring to the group’s spiritual leader who was assassinated by Israel in 2004.

Ahead of its anniversary celebrations, Hamas reiterated its aim to recover all of historic Palestine from the Mediterranean to the Jordan River.

“We will cede none of it, and we will not recognise the so-called state of Israel,” a statement said on Monday, adding that its aim was to make Jerusalem the “capital of the state of Palestine” and pledging to work against Israel’s “methods of Judaisation” in the Holy City.

The strident statements stood in sharp contrast Haniya’s remarks on December 1, when he suggested Hamas could accept a negotiated peace deal if the Palestinian population and diaspora approved it in a referendum.

Hamas “will respect the results of a referendum even if the results conflict with Hamas’s positions,” he told foreign journalists at the time.

“We accept a Palestinian state with full sovereignty on the land occupied in 1967 with Jerusalem as its capital and a solution to the issue of refugees.”

Meanwhile, we are sending more money to them through the Palestinian authority, and they are going to be very well off thanks to us.

The European Union continues his anti-Israeli stance and has “threatened” Israel with “recognising the Palestinian state” (which one?) if Israel continues building settlements, inside its borders. Although afterwards it seems that they have thought a little about that and have announced they will “wait for appropriate time” for recognizing it.

European racism is the main reason why Turkey will not be accepted into the EU, says Noam Chomsky according to Turkish newspaper, Today’s Zaman.

“Europe can claim with some justification that Turkey has not satisfied all of the human rights conditions. On the other hand, I don’t really think this is the reason. …I think it is plain racism,” Chomsky said in an interview with the newspaper on Sunday.

…Chomsky added that there are worse human rights violators among European countries and pointed to Britain which participated in the war in Iraq.

“Has Turkey done anything like that? On the contrary, it refused to participate in the invasion. That’s a much higher level of observance of human rights and even international law…I always felt Europe was more racist,” he said.

The MIT professor visited İstanbul on Friday to participate in an international conference on the freedom of expression, and said he had seen great improvements in Turkey’s approach to human rights, especially in its treatment toward the Kurds.

So, now it results that after 500 years of Ottoman dominion over the Balkans (with the mixture of races and physical types that causes), Europe lets Balkan countries enter the EU and not Turkey but the problem is racism. It’s amazing this guy can sell books…