This is worrying: this is no Islamist lunatic who says Sharia Law should be implemented in the US and that every woman should wear a burqa. No, this is a judge that considers that, above US law, there is another one: Sharia Law. At least, the ruling was overturned on appeal.

In S.D. v. M.J.R., the plaintiff, a Moroccan Muslim woman, lived with her Moroccan Muslim husband in New Jersey. She was repeatedly beaten and raped by her husband over the course of several weeks. While the plaintiff was being treated for her injuries at a hospital, a police detective interviewed her and took photographs of her injuries. Those photographs depicted injuries to plaintiff’s breasts, thighs and arm, bruised lips, eyes and right check. Further investigation established there were blood stains on the pillow and sheets of plaintiff’s bed.

The wife sought a permanent restraining order, and a New Jersey trial judge held a hearing in order to decide whether to issue the order. Evidence at trial established, among other things, that the husband told his wife, “You must do whatever I tell you to do. I want to hurt your flesh” and “this is according to our religion. You are my wife, I c[an] do anything to you.” The police detective testified about her findings, and some of the photographs were entered into evidence.

The defendant’s Imam testified that a wife must comply with her husband’s sexual demands and he refused to answer whether, under Islamic law, a husband must stop his sexual advances on his wife if she says “no.”

The trial judge found that most of the criminal acts were indeed proved, but nonetheless denied the permanent retraining order. This judge held that the defendant could not be held responsible for the violent sexual assaults of his wife because he did not have the specific intent to sexually assault his wife, and because his actions were “consistent with his [religious] practices.” In other words, the judge refused to issue the permanent restraining order because under Sharia law, this Muslim husband had a “right” to rape his wife.

via The Real Impact of Sharia Law in America.

In a shocking incident, a Pakistani man has gunned down his six daughters on suspicion that two of them were in relationships with boys in the neighbourhood. Arif Mubashir called his teenage daughters to his room and shot them while the rest of the family, including their mother, watched. His wife Musarrat called the police after the incident, the Express Tribune daily reported today.

Mubashir, a resident of Punjab province, shot the girls after their brother said two of them were in a relationship. He told police officials that he had killed his daughters because they were “without honour”. The man said his daughters Sameena, 14, and Razia, 16, were in a relationship with college boys from the neighbourhood and the sisters had helped each other. “I should have been told immediately but the girls sided with each other. They were both corrupt,” Mubashir told Tandlianwala Police Inspector Javed Sial.

Police officials have taken Mubashir into custody and filed a case against him. “He does not regret what he did. He boasted that he would do it all over again if he had to,” Sial was quoted as saying.

By Memini.co. Thanks to EuropeNews. 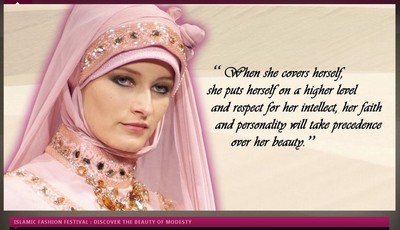 Asra Q. Nomani, a former reporter for The Wall Street Journal, argues that the Internal Revenue Service should move to deny tax-exempt status to any place of worship that holds to different roles for men and women. In “End Gender Apartheid in U.S. Mosques,” Nomani writes, “I’ve come to the difficult decision that women must use the legal system to restore rights in places of worship…”

“Nomani writes out of her own experience as a Muslim woman in the United States,” reports Mohler.

As she relates in her article, she has joined with a movement that has launched “Pray Ins” at several mosques in the Washington, D.C. area, protesting the practice of separating Muslim men and women for prayers.

An arrogant Saudi woman made the mistake of her life when she retaliated to a heavy joke by her husband with a much heavier one. The husband simply turned his joke into reality and married another woman.

The unnamed couple were visiting the wife’s family when her husband joked by telling her brothers that he would marry again.

“His wife joked back but it was a much heavier joke when she told him ‘I can kick you with my leg any time and marry another one with my money.”

“Her husband got furious and decided to marry another woman…her brothers tried to calm him down but he felt very offended,” Kabar newspaper said in a report from the capital Riyadh on Monday.

“The real joke is that he went ahead with the marriage and the brothers of his first wife paid all wedding costs….that wife paid a heavy price of her joke.”

After gendercide, now they are changing sex on infant girls, because “boys are much more valued”:

The Indian episcopal conference has “strongly condemned” sex-change operations performed on infant girls at the request of their parents. In Indore–a city of 1.5 million in the central Indian state of Madhya Pradesh–some 300 girls under the age of one have reportedly been victims of the operation.

“We have strongly condemned, as Indian bishops, this horrible practice,” said Father Charles Irudayam, an official of the Episcopal Conference of India. “It is the result of a mindset that favors [the] male as a source of profit and as a son of greater value, mortifying the dignity of women.”