“Please, for the sake of our country, use birth control”. Sign put up by the Government. Image via Wikipedia

According to a report in the Caixin Weekly magazine, population control officials in the Chinese province of Hunan have seized at least 16 babies born in violation of the one-child policy, sent them to state-run orphanages, and then sold them abroad for adoption.

“Before 1997, they usually punished us by tearing down our houses for breaching the one-child policy, but after 2000 they began to confiscate our children,” the magazine quoted villager Yuan Chaoren as saying.

Mara Hvistendahl is worried about girls. Not in any political, moral or cultural sense but as an existential matter. She is right to be. In China, India and numerous other countries (both developing and developed), there are many more men than women, the result of systematic campaigns against baby girls. In “Unnatural Selection,” Ms. Hvistendahl reports on this gender imbalance: what it is, how it came to be and what it means for the future.

In nature, 105 boys are born for every 100 girls. This ratio is biologically ironclad. Between 104 and 106 is the normal range, and that’s as far as the natural window goes. Any other number is the result of unnatural events.

Yet today in India there are 112 boys born for every 100 girls. In China, the number is 121—though plenty of Chinese towns are over the 150 mark. China’s and India’s populations are mammoth enough that their outlying sex ratios have skewed the global average to a biologically impossible 107. But the imbalance is not only in Asia. Azerbaijan stands at 115, Georgia at 118 and Armenia at 120.

What is causing the skewed ratio: abortion. If the male number in the sex ratio is above 106, it means that couples are having abortions when they find out the mother is carrying a girl. By Ms. Hvistendahl’s counting, there have been so many sex-selective abortions in the past three decades that 163 million girls, who by biological averages should have been born, are missing from the world. Moral horror aside, this is likely to be of very large consequence.

In February China launched a campaign against dissent that has resulted in the detention of those criticizing the Chinese government without giving the accused a trial.

Chinese blogger Fang Hong was detained on April 24 and sentenced to serve one year in a Chongqing re-education labor camp for using a blog to mock the chief of Chongqing’s Communist party, Bo Xilai, despite his removal of the blog post following the orders of web censors.

Hong’s blog arose from Chongqing’s prosecution of a lawyer, Mr. Li, who defended a man being prosecuted for perjury. Mr. Li was himself charged after his former client testified that he had encouraged him to make false torture allegations. However, many believe that Mr. Li was framed by the government for opposing the campaign of Bo Xilai. Mr. Li was convicted and sentenced to two and a half years in prison.

… (China) has invested heavily in the strength and technical sophistication of its missiles. The Pentagon has described China’s programme as “the most active land-based ballistic- and cruise-missile programme in the world”.

Missiles are good value. Compared with a fully equipped aircraft-carrier, which might cost $15 billion-20 billion, a missile costs about $1m. And missiles can be potent. The chart shows how, in terms of numbers, China has concentrated on short- and medium-range missiles. This puts Taiwan within easy range of a devastating cruise- and ballistic-missile attack. Military analysts fear that the Second Artillery could retarget the missiles, putting Japan at risk, as well as America’s Asian bases.

China also has a few intercontinental ballistic missiles, able to carry a nuclear payload. And American strategists are closely watching an experimental anti-ship ballistic missile with a manoeuvrable warhead, which could make it hard for American fleets to approach the Chinese shore. China recently hinted that it may be ready to cut the number of missiles targeting Taiwan. Whether this comes to anything will depend upon relations with the island—and they can be highly unpredictable. 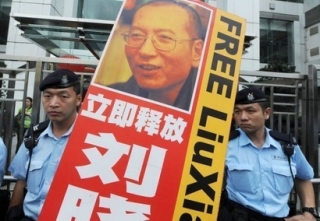 Liu Xiaobo was imprisoned for 11 years due to his participation in the document called Chapter 08, in which several people supported democracy and the end to the “one-party”

… China and 18 other countries have decided not to be represented “for various reasons.” It noted that number has tripled from six weeks ago.

The 58 countries who have embassies in Oslo were invited to attend.

The 54-year-old writer and academic was jailed in December 2009 to serve an 11-year term for subversion. He was detained just days before the publication of what has turned out to be an explosive political document, Charter 8, which he co-wrote.

Charter 08 calls for an end to one-party rule and the introduction of democratic reforms in China. It was signed, via the internet, by thousands of people, some of them Communist Party officials.

The 2010 Report on Religious Freedom in the World by Aid to the Church in Need (ACN) was released yesterday in Rome. It shows that the situation is serious in many parts of the world, particularly in Asia. In the Near East, Iraq represents an especially bad case where anti-Christian violence is taking on the form of systematic persecution, as the latest episodes indicate. In Egypt, despite the fact that it is a major tourist destination, there have been many acts of violence against the Christian minority in 2009-2010. Lebanon shows how difficult it is for foreign religious staff to enter the country. The situation of Christians in Hamas-controlled Gaza Strip is getting worse with episodes of explicit persecution.

In India, ethnic and religious violence is rising as well. The year 2009 clearly illustrated the problem. However, China is certainly among those nations where religious freedom is denied in all its facets. However, information about what happens in that nation remains limited and hard to obtain. The state is officially atheist and suppresses all form of religion through arrests and detention in concentration camps. The case of Mgr Julius Jia Zhiguo is one of the better known. The underground bishop of Zhengding (Hebei) was arrested by five police officers on 30 March 2009; he was eventually released 15 months later.

In Pakistan, the blasphemy law is used as weapon against religious minorities, especially Christians who are the victims of Muslim fundamentalism. In Afghanistan, the government is not able to ensure effective religious freedom. In Bangladesh, where Islam is also the state religion, several cases of discrimination and attacks against minorities have been recorded with security forces showing little interest in protecting them.

via ASIA The ACN Report on religious freedom in the world is released – Asia News.

When I find the report in English I will post the link here. It’s necessary that these facts are reported and really known outside those countries.